'If Coronavirus Doesn't Kill Me, Hunger Will': Mexico's Poor Bear Brunt Of Pandemic 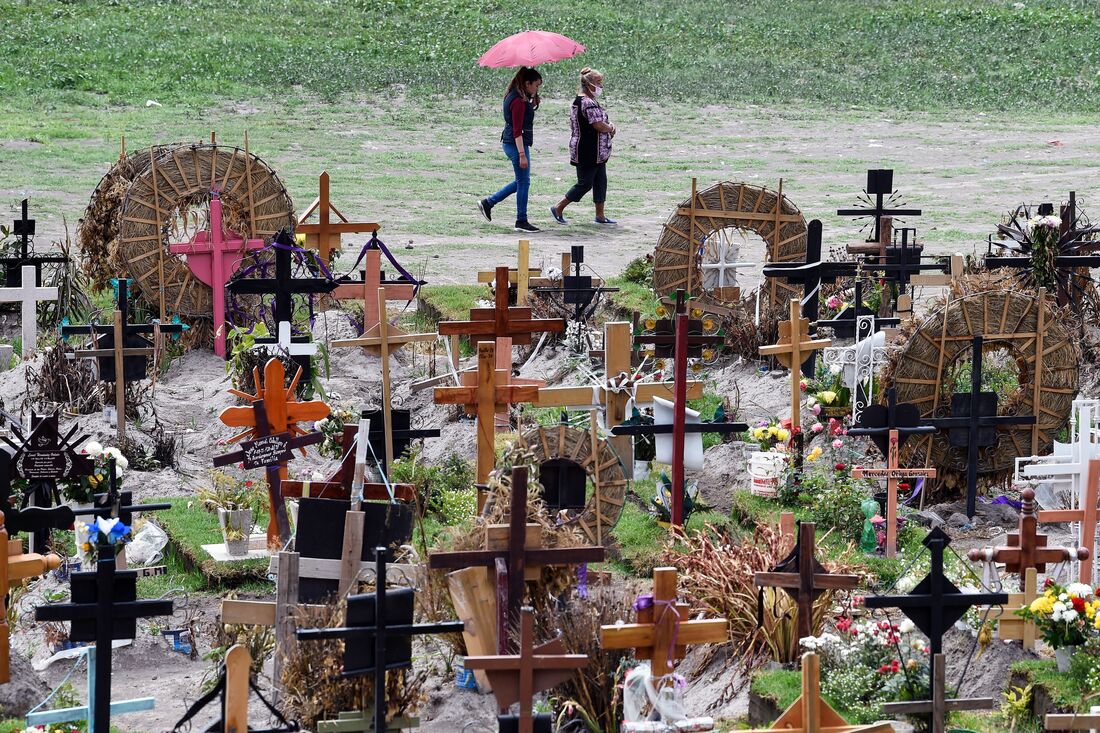 Relatives of those who have died from COVID-19 visit graves in the special area of the Municipal Pantheon of Valle de Chalco, Mexico. The coronavirus has taken a heavy toll on the country, especially its poorest citizens. Alfredo Estrella/AFP via Getty Images hide caption 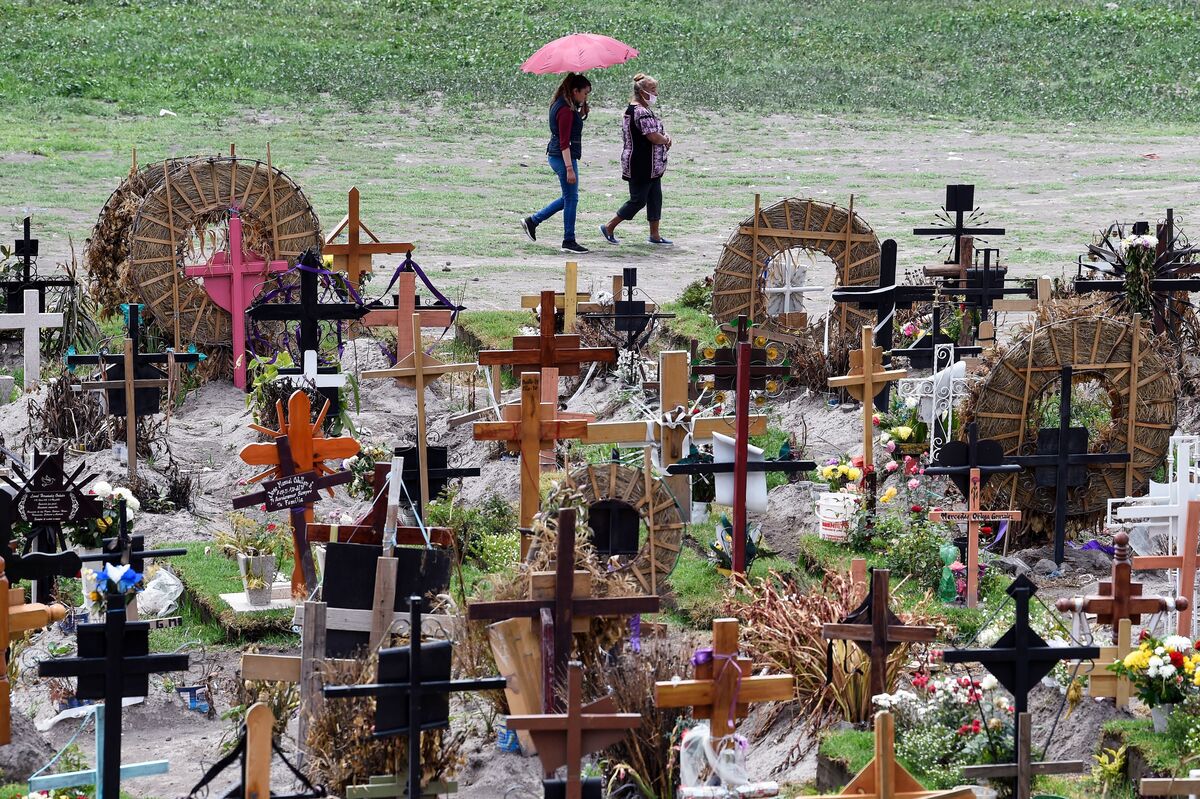 Relatives of those who have died from COVID-19 visit graves in the special area of the Municipal Pantheon of Valle de Chalco, Mexico. The coronavirus has taken a heavy toll on the country, especially its poorest citizens.

Every morning, Rosa Gallegos has to make a decision: stay at home with her family to be safe from the coronavirus or hit the streets of Mexico City to make money so they can eat.

The 61-year-old grandmother always comes to the same conclusion: “If coronavirus doesn’t kill me, hunger will.”

On a recent Thursday, she stands on a street corner near a public hospital complex, hawking little bags of nuts. “Nuts, 10 pesos. Get your nuts, 10 pesos,” she said to passersby.

Before the pandemic, she worked a few days a week earning about 500 pesos ($22.60) each day. Combined with her daughter’s salary, the family made ends meet. But today, Gallegos is trying to survive on as little $3 to $5 a day.

“I have one daughter who still depends on me,” Gallegos told NPR. “She has two young sons, and she was recently laid off.” Mexico has no federal unemployment insurance, and her daughter didn’t qualify for Mexico City’s unemployment funds since she didn’t have a contract with the clothing store where she worked. “That’s why I have to go out and keep working, to help her, to support her,” Gallegos said.

As the coronavirus keeps surging in Mexico — where the government registers more than 400,000 confirmed cases and more than 45,000 fatalities, the world’s fourth-highest death toll — families are hurting across the country. But low earners have been doubly hit: They make up the highest share of virus-related deaths and lack the funds to stay afloat as the pandemic plunges Mexico deeper into recession. Now pressure is rising on the government to improve its health response and offer financial help to those in need.

The toll of the mounting crises is showing in Mexico’s capital. Long lines are forming at city government mobile soup kitchens. 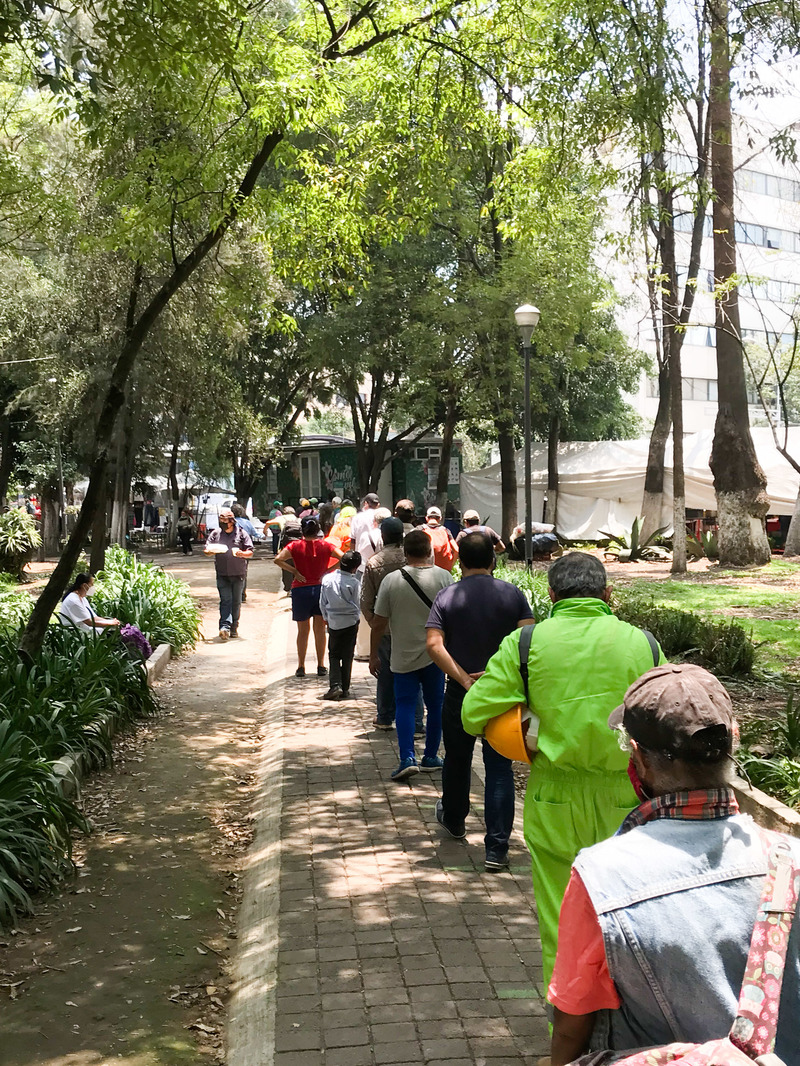 People line up for food from a soup kitchen in Mexico City. The city’s welfare agency has scrambled to deal with growing demand as the pandemic deepens Mexico’s recession. James Fredrick for NPR hide caption 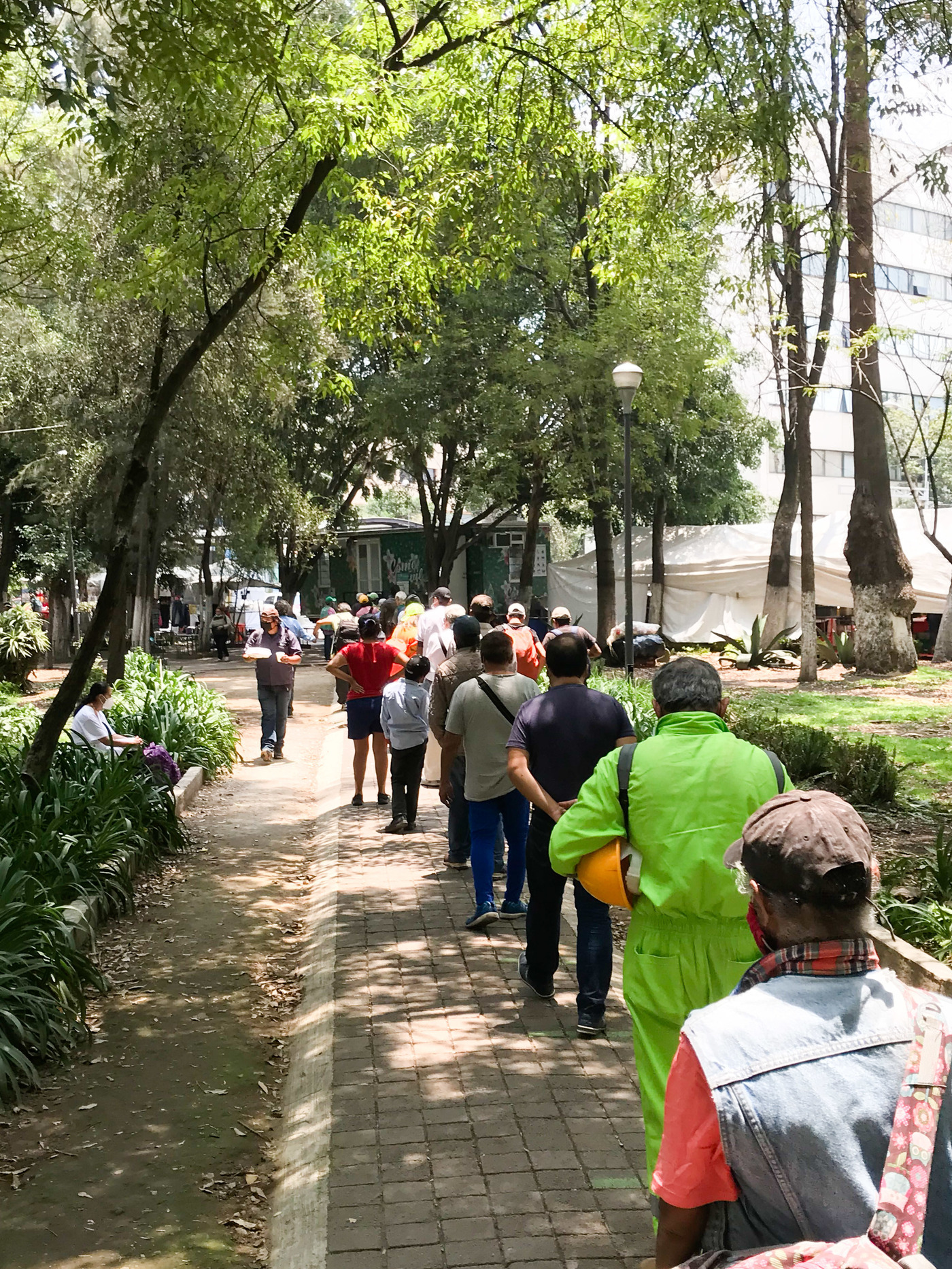 People line up for food from a soup kitchen in Mexico City. The city’s welfare agency has scrambled to deal with growing demand as the pandemic deepens Mexico’s recession.

“We’re serving about 20% more meals each day,” Almudena Ocejo Rojo, the head of Mexico City’s social inclusion and welfare agency, which runs these soup kitchens, told NPR. “Food assistance is something we’re seeing the demand for increase, and we’ll keep trying to fill that need.”

The agency, tasked with providing aid particularly for the city’s homeless, those with disabilities and older people, is scrambling to deal with the growing demand as the heavily populated megacity remains at the epicenter of Mexico’s contagion. The agency has relocated soup kitchens to hospitals to feed hungry relatives of COVID-19 patients and has expanded capacity at homeless shelters.

It wasn’t so long ago that Mexico’s poor and vulnerable were told they needn’t worry about the coronavirus. In early March, some of the country’s first coronavirus cases were wealthy Mexicans returning from a ski trip in Vail, Colo. The coronavirus, politicians and media commentators said, was a disease of the rich.

President Andrés Manuel López Obrador, elected in 2018 with broad working-class support, repeatedly downplayed the risk of an outbreak. “Pandemics won’t do anything to us,” he said on March 15 — when Mexico reported more than 40 cases. He flaunted good luck charms as his defense against the virus.

That month, one of the president’s best-known supporters, legal scholar John Ackerman, tweeted the hashtag #VailNoEsMexico, “Vail is Not Mexico,” implying that the country didn’t need to enforce anti-coronavirus measures.

On March 26, the governor of Puebla state, Luis Miguel Barbosa, an ally of the president’s, said, “The majority [of coronavirus cases] are people with money. If you’re rich, you’re at risk, but not if you’re poor. Us poor people, we’re immune.” By then, the virus had ravaged people of all backgrounds in many countries.

More than 40,000 COVID-19 deaths later, the opposite is true, according to a study by Héctor Hernández Bringas, a demographer at the National Autonomous University of Mexico, known by its Spanish initials UNAM.

“As happens in any crisis, in any disaster in a country like Mexico, the vulnerable are the most affected,” he said.

Hernández has been tracking the demographic data on death certificates of COVID-19 victims and has made some stunning discoveries. 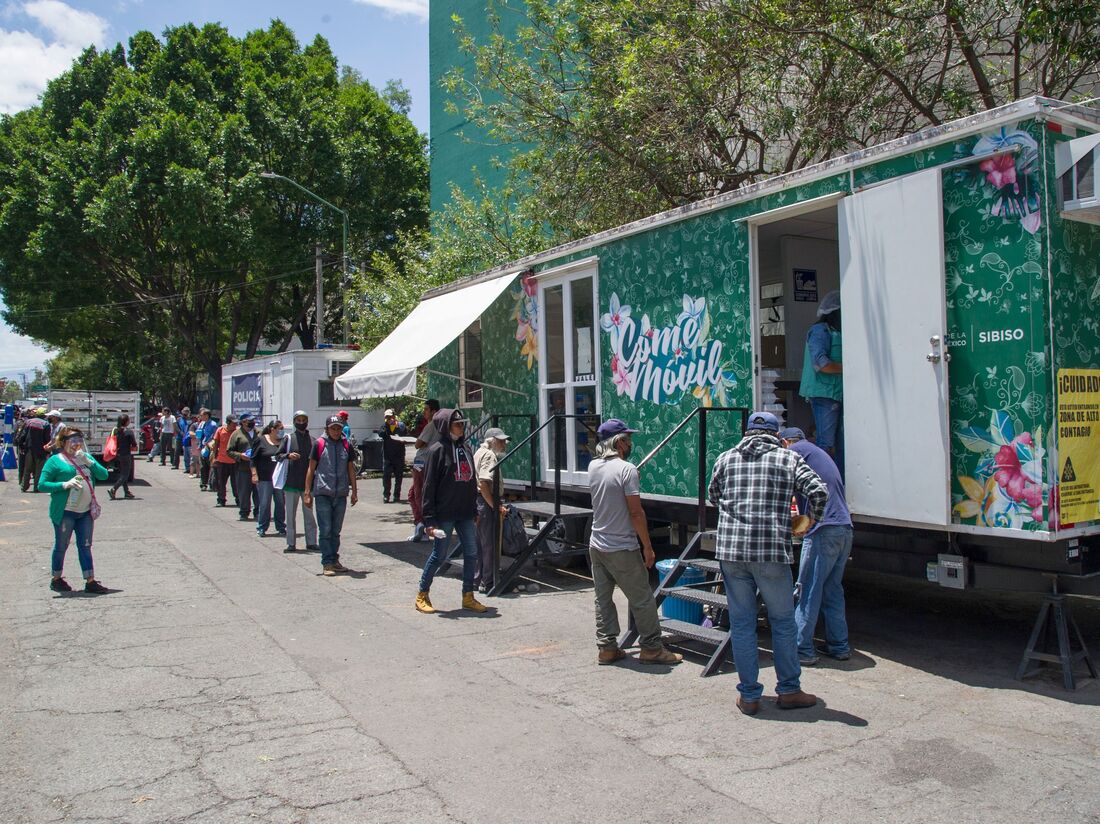 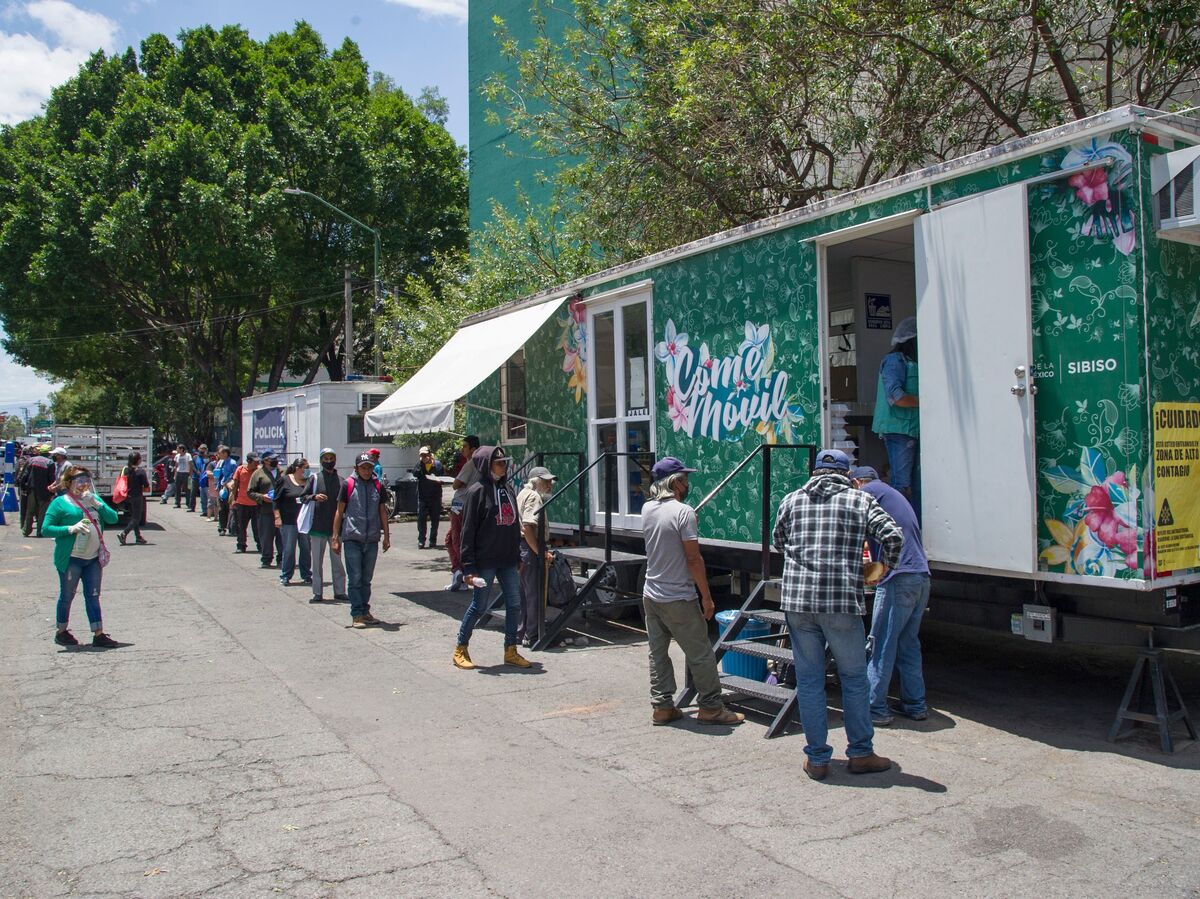 “More than 70% of people who have died from COVID had an elementary school-level education or less,” he said. That’s a significant share of the country, where more than half of the population completes high school. Low education also means higher poverty and social inequities among those affected.

“More than half of people who have died from COVID died in Health Ministry hospitals,” Hernández said. He explained these are public hospitals that cater to all Mexicans, particularly the poor and those without health insurance.

He added that 9% of the deaths happened outside of a health facility, meaning thousands of Mexicans have succumbed to the disease without medical care.

The family of Gallegos, the street vendor, experienced this firsthand.

“I know how terrible it is because I saw it with my nephew. He didn’t even last eight days,” she said.

Gallegos’ nephew was a healthy 29-year-old. When he developed flulike symptoms, the family didn’t know what to do — there was conflicting information about the coronavirus, and rumors were swirling it was a hoax. By the time he was in critical condition, family members couldn’t get him admitted to a hospital. He died in bed. The coroner’s report confirmed he had COVID-19.

The coronavirus has hit Mexico’s poor hard, in urban centers such as Mexico City as well as in small, rural communities in states such as Guerrero and Oaxaca. And the disease is only part of the pain.

“Many millions of people have lost their jobs … and the government hasn’t given really any support to firms or workers at all,” said Valeria Moy, director of the Mexican Institute for Competitiveness, a pro-business think tank in Mexico City.

An estimated 12.5 million Mexicans lost their job and left the job market entirely in April when coronavirus restrictions came into effect, according to analysis of official data.

According to an estimate from BBVA Bancomer Bank, it will take Mexico a full decade to recover the economic losses underway without major fiscal stimulus.

The López Obrador administration has offered 25,000 peso ($1,130) business loans, but Moy said they won’t make a dent in the slump. The government also advanced pension payments to the elderly but has so far rejected any new cash transfers to support struggling Mexicans.

“[López Obrador] has a very deep aversion to debt. He hates debt. One of his main campaign promises was to decrease the debt. He is very stubborn in saying we will not incur more debt,” Moy said.

It’s a difficult position to square for a president who often uses the phrase “primero lo pobres,” which means putting “the poor first.”

“What worries me most is that the government doesn’t seem willing to respond to the gravity of this crisis,” said Rolando Cordera Campos, an economist from UNAM. “Those who earn little, who live day to day, which is a lot of people in Mexico, are the most immediately and directly affected by lockdowns.”

A government agency that tracks poverty and social programs estimates that more than 10 million Mexicans could fall into extreme poverty because of the economic effects of the coronavirus. That would wipe out more than a decade of poverty reduction.

“There’s no reason people should be going hungry in Mexico,” Cordera said. “We can afford to spend this money.” 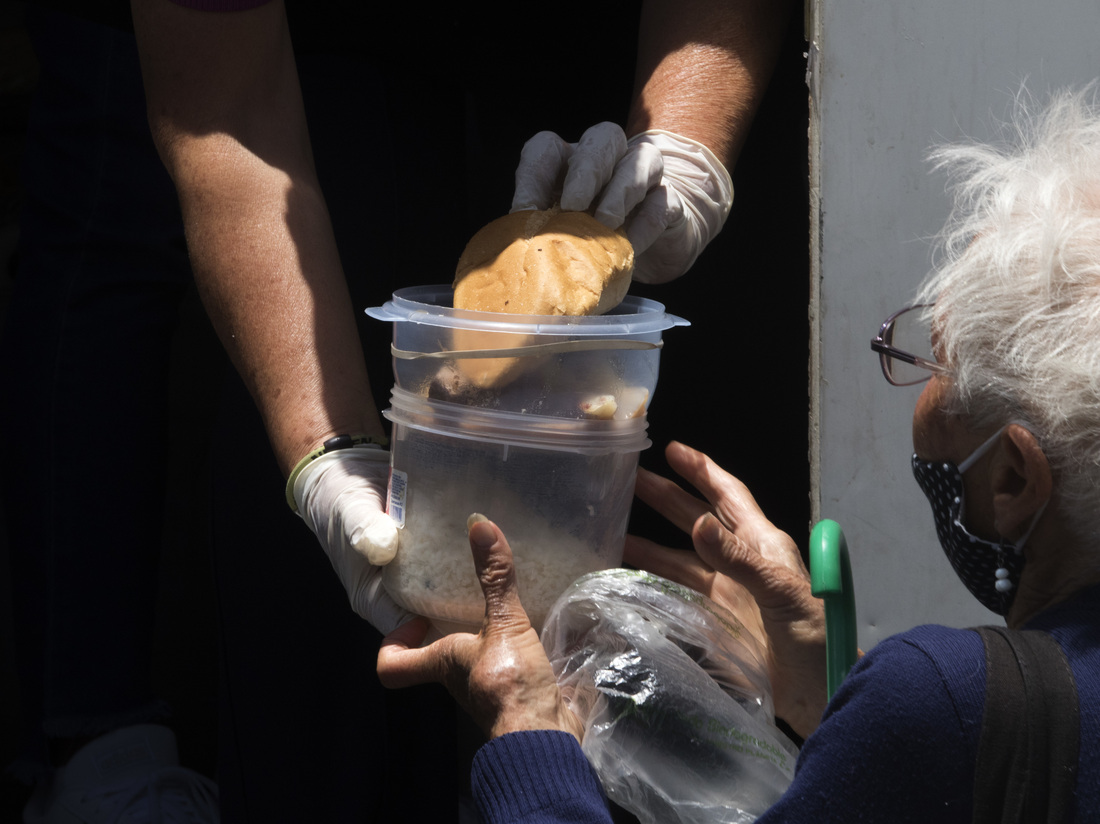 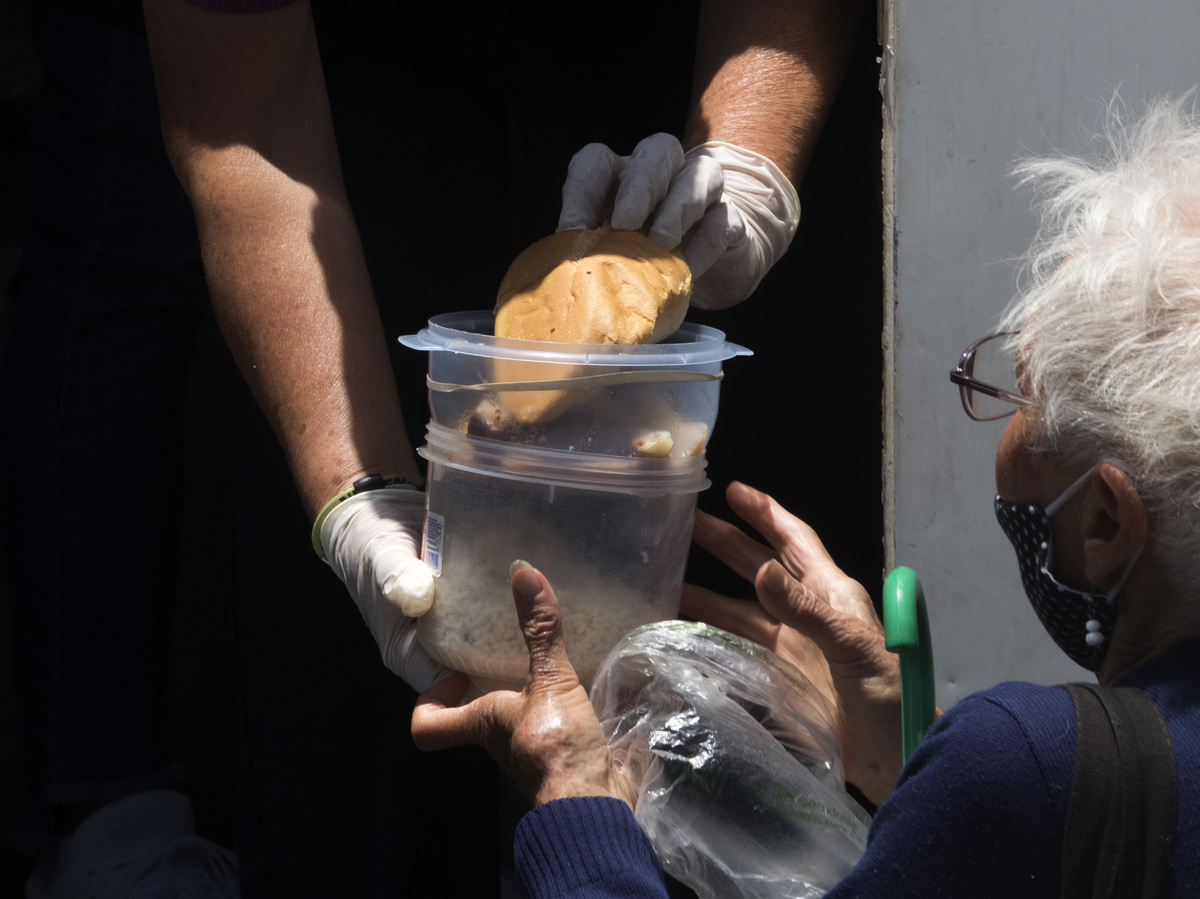 “Millions of people incurred the economic cost of staying at home, for the public good of stopping the spread of the virus,” Cordera said. “The government hasn’t taken the right steps to ensure they don’t suffer for this.”

In Mexico City at least, it’s too early to predict the long-term social impact of the pandemic, said Ocejo Rojo of the local government. Over the next few months, the welfare agency will collect data and have a clearer picture. But the worry is palpable.

“My concern is that inequality is reinforced because of the pandemic, that people who are already vulnerable suffer greater hardship and end up being even more vulnerable because of this,” Ocejo Rojo said.

Gallegos said she has no choice but to keep working every day.

“I don’t receive any support from anyone,” she said. She shrugs off the lack of government aid, saying, politicians “are all the same: They say they’ll help and they never do.”

She’s doing what she can to avoid the virus. She said she wears a mask, keeps a distance from others and regularly disinfects or washes her hands.

“I hope the virus doesn’t find me, that I don’t catch it,” she said.

“But if it does, oh well. If I can’t be cured, I guess I’ll be going to another place.”